The history of the Seminary goes back to 1930’s. In 1932 Bishop Constantine Bohachevsky purchased 8 acres of land along with a building known as the Quintard Estate, with the intention of establishing a Seminary and Cultural Center here in Stamford. In September of 1933, in the presence of several thousand faithful, a Seminary was established on Labor Day. The same year, a high school started operating with twenty-two students enrolled. The first graduation of the high school took place in 1935. Sixty-two priests had graduated from St. Basil's high school in the first years of its existence. Until 1938 only the high school operated here. In the same year Bishop Bohachevsky decided to establish a College Seminary and one year later it was officially registered in Connecticut and, in the same year, it became eligible to issue a bachelor's degree. Thus, the official opening date of St. Basil's College is September 18, 1939. The high school was renamed St. Basil Preparatory School.
‍
Today, the Seminary can boast that it has graduated eminent bishops of the Ukrainian Catholic Church, e. g., Bishop Basil Losten—longtime Eparch of the Stamford Eparchy, now Bishop Emeritus; Bishop Yaroslav Gabro of Chicago; Bishop Walter Paska, Auxiliary Bishop of the Philadelphia Archeparchy; Bishop Richard Seminack of Chicago; Bishop Robert Moskal of the Eparchy of Parma;  Cardinal and Patriarch Lubomyr Husar, the Head of the Ukrainian Catholic Church. The achievements of our Seminary College were unique – from 1942 to 2008 the College held 58 graduations for 230 graduates – and 131 of them went on to continue their theological studies and were ordained priests.
‍
Successful student enrollments in the 1950s revealed a lack of space in the Chateau and demanded a new seminary building for the College. As mentioned previously, Bishop Joseph Schmondiuk became the new Stamford Bishop in 1961. He believed in the faithfulness of our persecuted Church in Ukraine and the Diaspora, and emphasized our national maturity. He felt the need to educate priests as a priority, and believed that “from here the Lord would call missionary priests for the restoration and revival of Christianity in Ukraine. What more can a person do for God's cause?”—asked Bishop Schmondiuk. On June 2nd, 1962, Bishop Joseph blessed the cornerstone of the new building and in the fall of 1963 seminary students moved to the new Seminary. Time was needed to complete the interior of the new seminary chapel. It would be completed later under Bishop Schmondiuk’s term. On September 7, 1964, the new Seminary building was opened. This ‘beacon of learning’ and ‘forge of souls’ was to serve the needs of educating new candidates for the priesthood and to prepare future missionaries for our Church in Ukraine. That was the vision of Bishop Joseph Schmondiuk, and he repeated it when he became Metropolitan of the Ukrainian Catholic Church in the United States of America. The merit of building and completing the Seminary building is definitively his.

What can we say about the life of this Bishop and Metropolitan who left us forty years ago? He was born in the borough of Wall, Pennsylvania, in a peasant family, who came to the United States to look for work in 1912. However, the flu epidemic that raged from 1917-19 took the lives of his father and mother in 1917, and left little five-year-old Joseph orphaned. He was brought up in orphanages. Bishop Constantine Bohachevsky sent the 18-year-old young man to pursue his philosophical and theological studies in Rome. Here he studied at the Angelicum and the Seminary of St. Josaphat. In 1936 he was ordained to the priesthood and in 1956 he was consecrated a bishop and became an Auxiliary Bishop to the Ordinary, Bishop Bohachevsky. Among his episcopal assignments, he was also appointed pastor of St. Nicholas parish in Philadelphia. Here his concern for educating young people in the love of their native Church, rite, Ukrainian language, history and traditions found expression in the creation of the Ukrainian Catholic Institute. Almost 70 high school and college students attended the Institute on Saturdays. The institute continued until 1965.The need for Catholic parish schools was always in the thoughts of Bishop Joseph and during his work as pastor he built parochial schools wherever he could. Bishop Joseph was fully committed to educating our youth and deepening their knowledge of their native church ritual, language and culture, not only for their own individual needs, but also for our Church and people.In his sermon during his installation as Metropolitan-Archbishop, Joseph Schmondiuk defined his priorities and said, among other points, the following prophetic words: “Everything will pass, and the Good Friday of the Ukrainian People will pass too. Our Easter is coming. And we, who by this time were only spiritually and morally able to help them (Ukraine), must be prepared to develop broad work in Ukraine and in other countries now persecuted by godless communism. We must have missionary priests willing to rebuild our Church through preaching Christ's Gospel in our native Land. This is the only one and highest goal for the existence of our Church as a separate body in the Diaspora... This is our program. This is our job. This is our mission.”
‍
In 1978, at the age of 66, Metropolitan Schmondiuk left us: He departed from us on Christmas Day, December 25th. However, his vision survived, when our Ukrainian Catholic Church saw its Resurrection—its Easter! The Eparchy of Stamford and the Seminary played an important role in helping the resurrected Ukrainian Catholic Church during the early period of its new existence. The Holy Spirit Seminary in Lviv received professors from the Eparchy of Stamford, graduates of our Seminary, who were active for many years in Ukraine. A graduate of the Seminary, His Beatitude Lubomyr Husar, Patriarch of the Ukrainian Catholic Church, moved his See from Lviv to Kyiv, the capital of Ukraine, where he built the Resurrection Cathedral. Awareness of the future of our Church in Ukraine was also realized by Bishop Basil Losten, who enrolled 20 candidates for the priesthood from Ukraine, where they studied for several years in our Seminary. On February 20th, 2006 the new Eparch of Stamford, Bishop Paul Chomnycky, OSBM, took over the further development of the Stamford Eparchy and Seminary with new students enrolled. The Board of Directors of St. Basil Seminary was made accessible for participation by lay people. Bishop Paul expanded the Seminary’s mission by giving public access to College resources. The Stamford Eparchy holds cantor courses and has renewed the program of continued formation for priests.

The mission of St. Basil college Seminary is to educate and prepare men who desire to pursue a vocation to the priesthood for the Ukrainian Catholic Church.

St. Basil Seminary is a center of learning and clerical formation. It enrolls students who wish to study for the priesthood in the Ukrainian Catholic Church. The program helps the student mature as a well-educated person, committed to Christ and to the service of people. The seminary’s community life reflects the influence of its goal – the priesthood – by accentuating spiritual, social, historical, and cultural development. It encourages the student’s desire to give true witness to the saving love of God in the world.

Of the over two hundred fifty graduates of St. Basil Seminary in over  80 years of existence, over one hundred and fifty have been ordained to the holy priesthood, six of whom have been elevated to the episcopacy, one of whom to cardinalate, His Beatitude Lubomyr Husar. While being a house of spiritual formation, the seminary also hosts several events throughout the year including cantor programs, eparchial synods, family days, youth conventions, altar boy conventions, presentations and conferences, and spiritual retreats.

The seal of St Basil Seminary is in the form of a shield, decorated with branches of the oak and olive trees, symbol of fortitude, youth, and God’s grace and surmounted with the Crow of Christ the King, symbol of triumph. Under the crown and above the shield appear the words which are the motto of the Seminary: Omnis Sapietnia a Deo (Ecc 1:1). The words which St. Basil the Great, the Patron of the Seminary, quoted often.
‍
The shield is quartered and each part contains a symbolic representation of an ideal institution: (a) the Immaculate Heart of the Blessed Virgin Mary as the seat of Wisdom; (b) the Column of Fire, symbolizing the Patron of the Seminary - St. Basil; (c) an early conventionalized representation of the flag of the United States; and (d) the Trident, symbol of Ukraine, native country of the founders of the Seminary. The colors of the Seminary are gold and blue; hence, these predominate in the seal. The motto with the triumphant Crown of Christ combines the variety into harmonious unity. 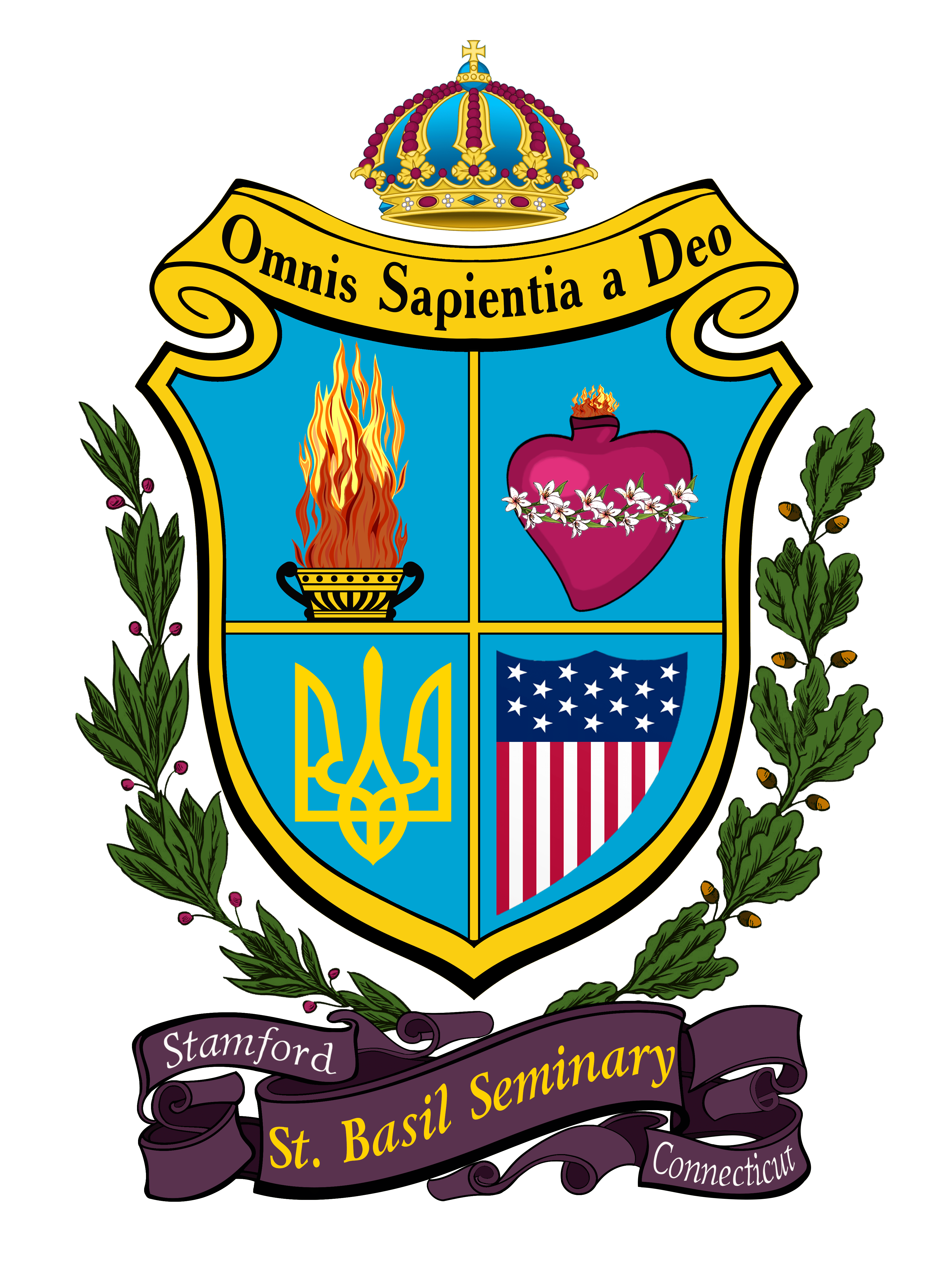